Harry, also lowering his personal best times in all his events, finished 2nd in the junior 100 metre final as well as 6th in the 50 metre junior freestyle, and 5th in the junior 200 metre freestyle. Off the back of Harry’s great swimming, he has earned a place on the GB junior team at the European juniors in Israel in June.

We are also delighted that Luke will be joined on the GB junior team at the World Junior Championships by Hatfield SC’s Nathan Hughes, now training at Loughborough National Centre but still a Hatfield member.

The selections of Luke, Harry and Nathan for the GB junior teams follow a strategy by British Swimming, aimed at inspiring a generation of young athletes to commit to a journey towards Tokyo 2020 Olympics success by exposing them to high level junior international competition.

Other Hatfield swimmers who also swam well at the British Swimming Championships were Reese Housden, Ben Garrett,  Laura Copping and Shannon Stott.  Congratulations to all those swimmers on their performances. 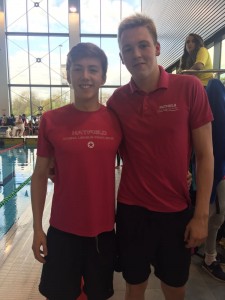 Pippa Shuttleworth Back At Hatfield