Congratulations to all our regional swimmers who contributed to Hatfield being named as the East Region’s Overall Top Club and winner of the “Warwick Thompson Memorial Trophy” for the club’s performances over the two weekends of the Long Course Regional Championships.

We saw some outstanding performances over both weekends and Hatfield finished at the top of the combined medals table (ahead of Peterborough in 2nd and Ipswich in 3rd) with a haul of 33 golds, 23 silvers and 24 bronzes.

The links to the results and medals tables for both weekends can be found here.

In addition to our impressive medal haul, our regional swimmers also recorded a high number of personal bests (74 PBs on Weekend One and 88 PBs on Weekend Two) and their overall performances were a credit to the club.

The focus of the club’s top swimmers now moves onto British and home nations summer nationals at the end of the season. The lists of qualifiers were published last week following the closure of the nationals qualifying window. Hatfield has an impressive 20 qualifiers for the British Summer Championships, and 28 qualifiers for the Swim England National Summer Meet. 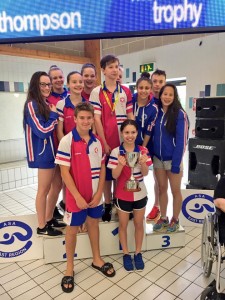