Hatfield Swimming Club was founded in 1966 and has grown from a small local club, to its current status as the premier swimming club in both Hertfordshire and the East of England. It is also recognised as one of the leading clubs in the UK.

Throughout the years the club has never lost sight of its principle objective – to offer all of its members the opportunity to achieve their highest potential within a friendly, but purposeful environment.

The club has also created a programme whereby swimmers, who are capable of reaching the very top of the sport (i.e. racing internationally or at national level), are given the best possible chance to do so.

We currently have over 200 swimming members who come from various locations throughout Hertfordshire, as well as from neighbouring counties and North London.
Within our swimming squads we have members of varying experience – from young children who have just started competitive swimming through to young adults who have many seasons of competitive experience behind them.

Our programme is in line with Long Term Athlete Development, as well as SwimMark Performance. 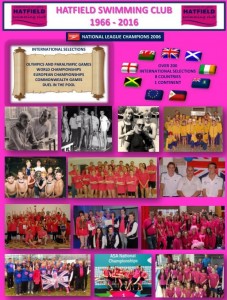